Linux Basics - Getting into Linux

# What is Linux?
From smartphones to cars, supercomputers and home appliances, home desktops to enterprise servers, the Linux operating system is everywhere.
Linux has been around since the mid-1990s and has since reached a user-base that spans the globe. Linux is actually

everywhere: It?s in your phones, your thermostats, in your cars, refrigerators, Roku devices, and televisions. It also runs most of the Internet, all of the world’s top 500 supercomputers, and the world’s stock exchanges.
But besides being the platform of choice to run desktops, servers, and embedded systems across the globe, Linux is one of the most reliable, secure and worry-free operating systems available.


# Who should use Linux?
As you might think. Linux is not a Black Terminal with green text. From Govt. Organisations to NASA, Military

Databases even use linux. Everyone can use it. It is 100% and easy to install there are lots of tutorials on the internet. It is not hard that There are tutorials, troubleshooting guides even if you don't know how to fix it.


# What is a Distro ( Distribution )?
Don't be confused by the names e.g Ubuntu, Kali, Manjaro etc.,. They're all same under the hood. They come with

different DE's ( Desktop Environment - UI ), Package Managers, Themes and Pre-installed tools. Simply they're called Distribution of the Linux. You can choose any of the distro. You can also make a distro work the like other one too.

# Choosing a Distro
I included some beginner friendly Linux Distributions without extra bloatware and simple tools. Here are the Best Linux for Newbies

Pay 5 VC to View Links to their official website

If you want to learn more about using linux. Then, this is for you. You learn the basic usage of commands with their work and explanation.

Terminal
You can do most of the things using the Terminal by executing commands. I will show you the commands.

This will output the text you specified after echo... You will not need this much. But, this will help you later.

This will simply list the files and folders in the current directory ( folder ) as I am in the starting folder which is called HOME directory. Bash is a colorful terminal. As you can see they are classified by different colors. For me, Dark Green is folder, Light green is executable ( Will cover it later ), white are normal files and red is zip files.

Bonus : ls -l will list files in a cleaner look.

As we previously saw Desktop in the listed files folders. We can move/change directory to the specified folder. Here you can see the folder name before the $ symbol. We can list the files in the Desktop by the ls command again. 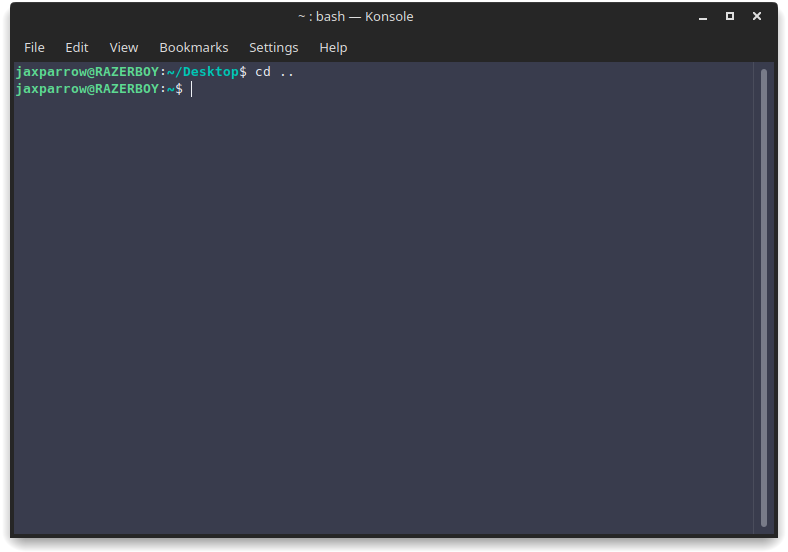 If you want to go back to the previous folder. You can execute this command [..] means previous directory.


rm - To remove file/s and folder/s

As you can see. I have a file called torch.apk in Desktop when listed. After deleting the file. It is not in the list. Same for the folders you can delete folders by adding -r at the end.

Deleting a folder called newfolder in the Desktop directory.


mkdir - To make a directory

For this you need to enter the folder name that you want to create after the mkdir. This same goes for creating, editing, deleting in linux. You need to specify the thing.


clear - To clear the terminal screen

If you have a lot of output and text and if the terminal looks messy.. Just type clear and hit enter to get rid of the outputs...
Bonus : You can also clear by Pressing Ctrl + L


cat - To read contents of file/s

As you can see it outputs the following file in the Terminal. You can cat any file but, you cannot read or your computer will crash if they are big. Sometimes it may corrupt the terminal screen. I suggest you to view only text files by this. 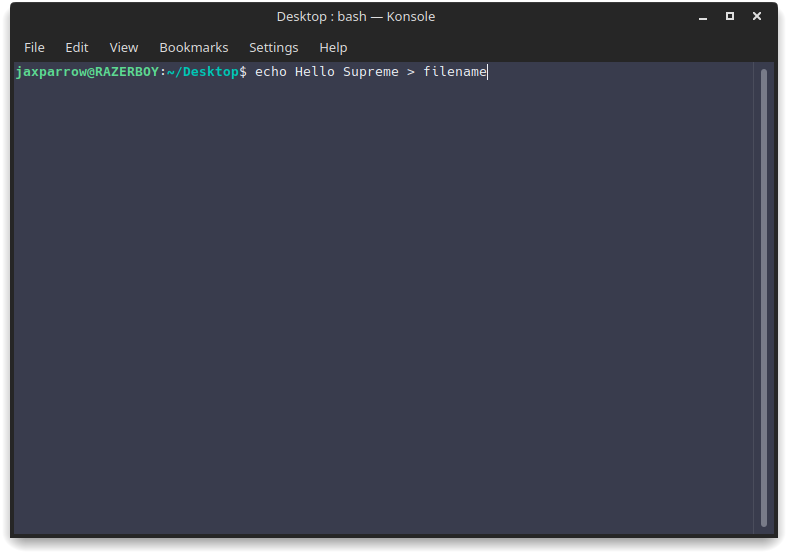 This will save the Output to the filename ( Which is specified after > symbol ). 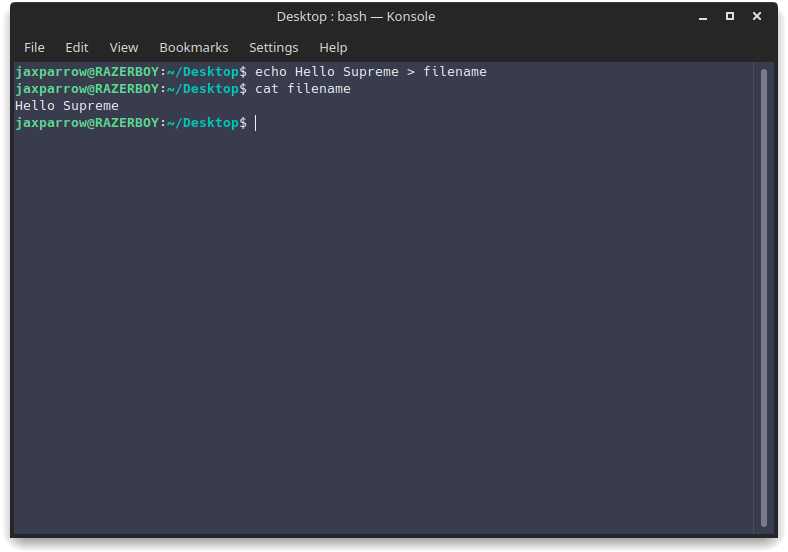 You can even save output of ls or other outputting commands ( Which will give text outputs ).

Linux Scripting
This is nothing but writing out the commands into a file and make them execute automatically. 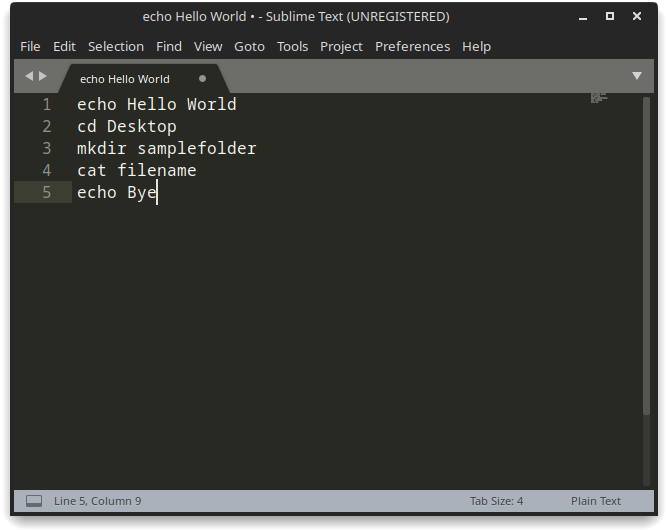 I opened a text editor ( notepad like ) and typed these commands and saved as a file called script. 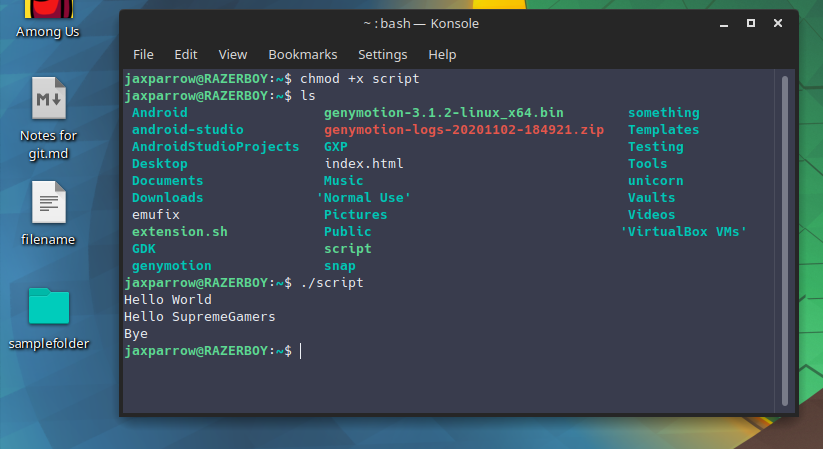 The script executed all the commands in the file.

Steps :-
chmod +x filename will make the file as a executable ( Runnable ) file.
I used ls to show the color of the file is changed in ls
./filename will run/execute the file that you specified.

After this the script will be executed and return output if there are outputting commands ( ls, echo, cat )


Note : This page will be updated frequently with new commands and new things for linux.
Managed by Jaxparrow

Well-known member · From Tamil Nadu, India
About Me:-
I am a YouTuber, Blogger, Freelancer, App Developer. I'd like to create Gearlock Extensions. Also, I am a serious gamer and I like to try most of the things for Gaming.View Portfolio for more information.
Moderator Blog Author

What commands do Android Terminal use?

Shamayel said:
What commands do Android Terminal use?
Click to expand...

They're all same. Android is also based on Linux under the hood. The commands I've posted will work on every system that is based on Linux.

CC Image from Internet. Reuse Allowed
​
Termux is a terminal emulator ( like qt, konsole on linux ). You can use most of the commands in Android. Android has basic binaries in system. If you want to perform any task that requires sudo in Linux. Then, you may need to get Root Access in your Android System. You can also use the terminal in Android x86 easily by Pressing Alt+F1. If you have any more questions or requests. Kindly contact on discord : Jaxparrow#1797 & Join Our Server.
You must log in or register to reply here.